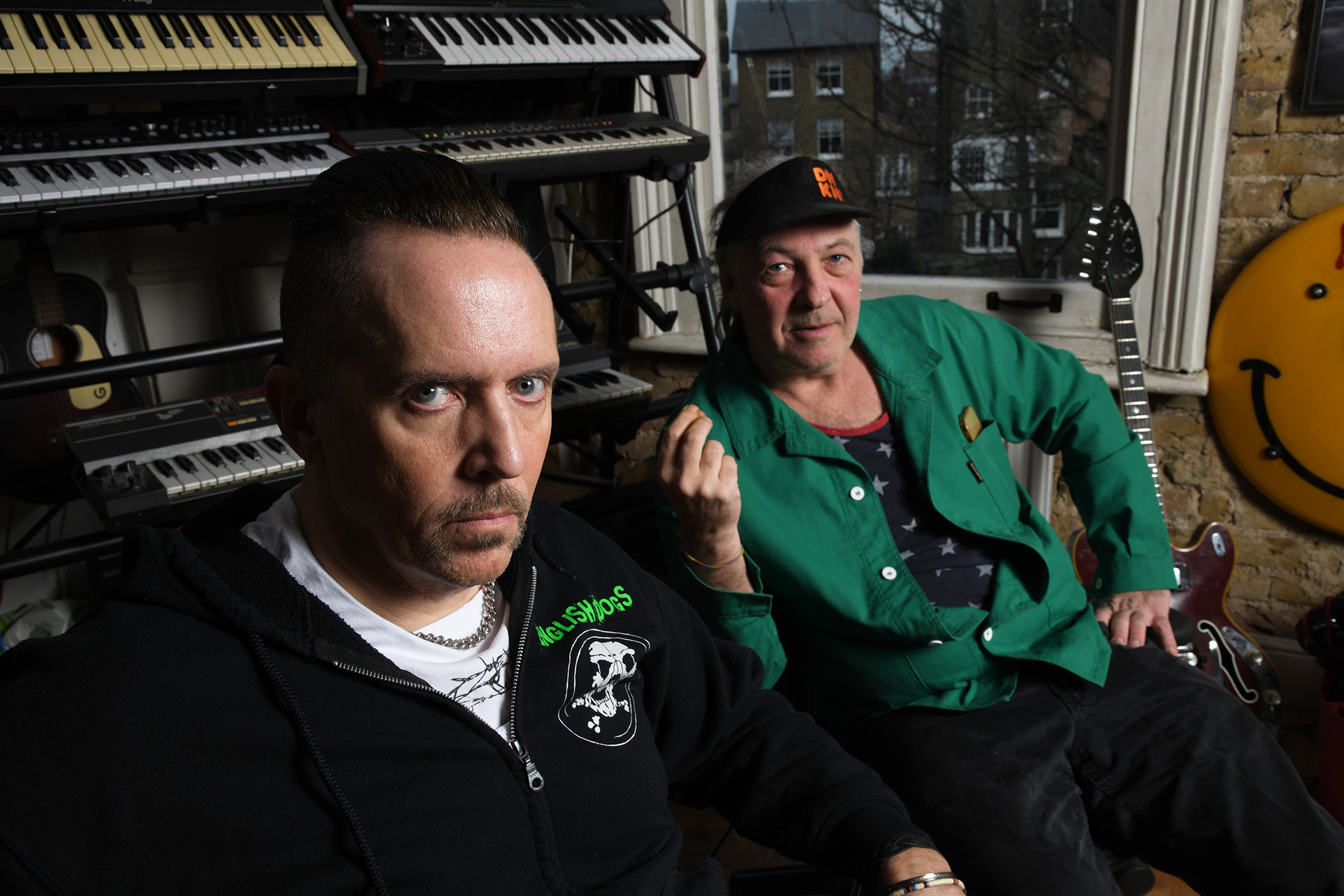 Sitting in producer Youth’s Spanish rock’n’roll sorcerer’s library, with the autumn sun glinting off the Sierra Nevada mountains, Butch Dante could almost forget the night his band The Imbeciles had imploded on a London club stage. They had gone too far into the dirty experimental dark of their eponymous debut album, getting lost on its nihilistic edge. “It’s easy to be angry and criticise everything,” Dante reflects now, “but you might as well try to come up with a solution. Making the new album [Imbecilica, released May 19th 2022], Youth preached that a lot: why don’t you try throwing some sunshine at them? So Imbecilica is a commercially viable rock album about the need for kindness in a very, very cruel world. Some of the old band weren’t able to contemplate that new direction, so I pulled the pin - then it all came back together.”

The Anglo-American Imbeciles are enigmatic writer/guitarist Dante’s creation, with a history of being vividly reborn. In chrysalis form they were a conventional punk band, Wartoad, till a Californian tour finished at an ex-biker roadhouse, whose former denizens were still inclined to dig up guns and bury bodies in the surrounding desert. Improvising with extreme freedom at what felt like the end of the world, The Imbeciles were born here.

2019’s The Imbeciles album was taped in eight deranged days, in a haunted studio on the Texan-Mexican frontier, the dry post-punk clang of “D.I.E.” and stoner languor of “Ice Cream” typifying a record of abrupt razor-edits and spectral moods. Wire were fans. But London’s Heavenly Social was the site of the first Imbeciles’ fall as they proved a kamikaze outfit, smashing up on impact. Singer John Kent was among those Dante made sure to pull from the wreckage. “John is mad for it,” he explains. “We did a video where he was Charlton Heston in Planet Of The Apes. I said, ‘You don’t look like you’ve been through the desert.’ So he throws himself on the ground, grinding his clothes into the mud, wiping it on his face. He’s committed.”

As lockdown hit in 2020, the Dissolution Sessions EP was the first sign of renewed life, with a rebuilt line-up and sound. “I said, ‘I want to do pub-rock,’” Dante says, “and it went over really well.” It outsold the original album, with Crystal Palace fan Dante’s art-punk football anthem “Sunday Leaguer” being played on Match Of The Day. Youth loved it, and invited them to his Andalusian studio to properly begin Phase 2.

Colonel Kurtz and Hunter Thompson had seemed guiding spirits during the first album’s stoned madness. Youth’s El Mirador studio was equally extreme in its way, rewarding the Imbeciles who’d survived Texas’s purifying flame with a hippieish, bohemian Shangri-La. Waking up in Peter Murphy’s bed (the Bauhaus singer is a regular guest), Dante had to pinch himself at this ascension into post-punk heaven. “It’s on a mountain on Spain’s southern coast,” he recalls, “where Youth has built a big compound with Moroccan-style minarets. It’s quite chaotic, with incredibly esoteric furniture, art and books. You climb up a ladder to a sorcerer’s library in a tower dedicated to music. It’s got a huge, sunken sitting room with a big fire, and a pool. When we got there, it was just me, John Kent and Youth. For three days we just ate food and talked, listened to music and watched Kubrick movies – and Final Destination! - and decided what we were going to do. The rest of the band turned up and plugged in, and things started happening.” Youth’s musical partner Michael Rendall played keyboards, with Youth playing bass and co-writing throughout.

“It was like a retreat from the world,” Dante reflects. “Then every so often, Youth would say, ‘Let’s go and see these flamenco dancers,’ or, ‘These friends who used to be Hells Angels, are coming over with their dogs later.’ There was a guy called the Cave Man, too, who lives in an 800-year-old cave with fellow cave-people.” English reserve soon evaporated in Youth’s bijou sauna. “Everybody packs in there, doing throat-singing and strange rhythms with shakers, till you’re not uptight anymore. He’s breaking down barriers in a gentle way. He wants to know who you are inside, and find out what the album should really be about. His approach starts with kindness and peace.”

Music was built on solidly melodic pop skeletons, and disciplined improv. “We have two incredible guitarists, and one really bad guitarist – me - who’s feeling it,” Dante says. “And Youth found a way to make all of that work together. There were times when he’d say to me, ‘Just play these two notes.’ There’s elements of The Fall or Joy Division, where that simplicity compliments other things. And we worked and changed lyrics on the fly. If we needed a new verse, I’d bang it out.” The results are a kind of crafted, post-punk pop, with crucial space retained for freak-outs. The needling, dive-bombing guitars and Youth’s canyon-ploughing bass on the dissolute “Let’s Go!” - “In a house with your friends, we let the cheap wine flow/Take a tab, order a cab, let everything go” – is a Top 10 hit time-warped from 1978. “Commercial’s a dirty word in music,” Dante considers. “But that’s essentially where we ended up. Youth said it’s high-energy rock. It’s riff-driven.”

Imbecilica’s whole angle of attack warped in response. “Originally, the album would have been named England’s Shame,” Dante explains. “It would have been about everything which has happened in the last 50 years, and saying that this has been enabled by the administration, by the Establishment, and why aren’t people in the streets marching? But none of those songs would ever have been aired.” The Imbeciles bitterly described a society with its natural kindness beaten out of it in the selfish years since Thatcher, the music pushing at you in frustrated rage. Imbecilica instead reaches out, and embodies that kindness.

This change was coming over Dante even before The Imbeciles’ Spanish sojourn. The soaring, epic ballad “I Won’t Let You Down” was the song that made Youth want to work with them. “It is a love song,” Butch Dante confesses. “I don’t write love songs, and yet there are two on this album. The other is “London Rain”, about a relationship that went wrong that took me five years to get over, a proper weepie.” On record, it’s The Imbeciles’ “Champagne Supernova”, Beatlesque and slightly psychedelic, with orchestrally heavy guitars.

London-born Dante, who mostly lives in Brooklyn, ponders his profound experience of the pandemic there, perhaps pertinent to his music’s emotional transformation. “I live opposite the hospital,” he says. “It went from having a little tent set up in the front where two people could do testing, to having refrigerated trucks outside to put the bodies in. And this is going on outside my kitchen every day. People in my neighbourhood were having such an appalling time, with no papers, work or safety net. And yet I also saw so much good in front of that hospital every day that I want to be a more positive force, instead of a cynical bastard pointing my finger at people.”

“It’s Not About You”, with its glam-punk terrace chorus, is born from this philosophy. “There are two viewpoints in the song. Somebody who’s extremely entitled, and not watching or looking or feeling. Then the other perspective is someone who’s going through real problems, and needs help.” England’s Shame’s bones poke through the pop here.

Imbecilica forms part of a wider art assault. Dante’s debut novel, Carybdis & The Boy, sets a boy much like the first album’s one-handed, red onesie-wearing anti-hero Tommy down in a barbarous, post-apocalyptic Earth, where survivors drive in a circle in the desert, trying to kill each other. The first album’s tradition of cinematic videos is also maintained. “Tiny Blue People”, with its piledriving, razor-wire guitars, becomes a Matisse-like cartoon, in which the titular creatures become a suburban contagion, infecting the barbecue-pits and sunbeds. “London Rain” sees long black coat-sporting Dante existentially wandering a deserted, Kubrickian tube station, dolefully inspecting Lambeth North’s surreal apertures and rotting walls.

The Imbeciles have meanwhile completed rehearsals at their UK base - secreted away from prying eyes in Sussex downland near where Virginia Woolf lived and drowned, with a machine-gun facing the road, and a stone circle in its garden. They will soon meet Youth again, when they support Killing Youth on their UK tour, climaxing at the Hammersmith Apollo. It’s quite an upgrade from the first Imbeciles’ implosion. Butch Dante’s not surprised. His mysterious changing band are on their second resurrection, and feeling immortal. 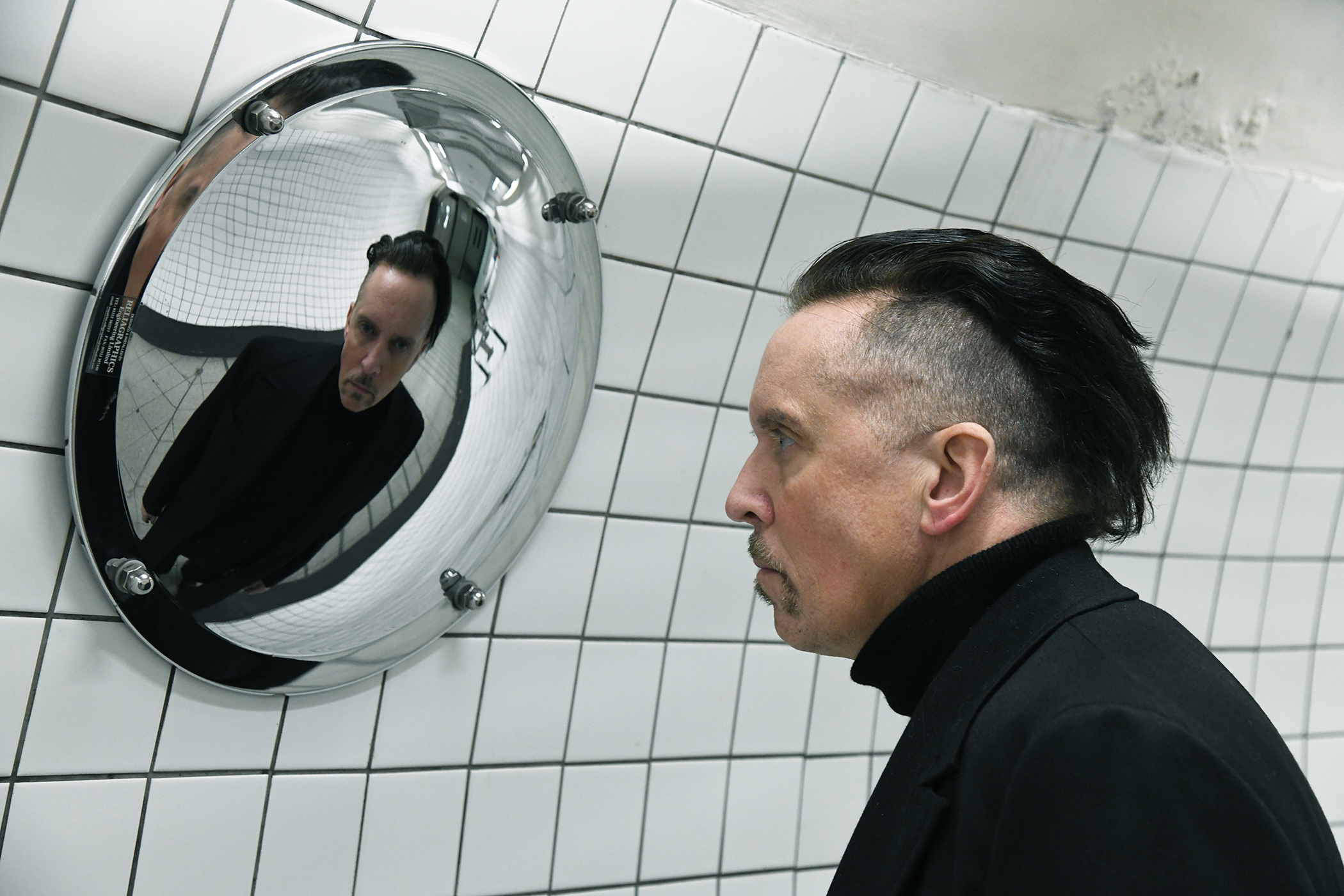 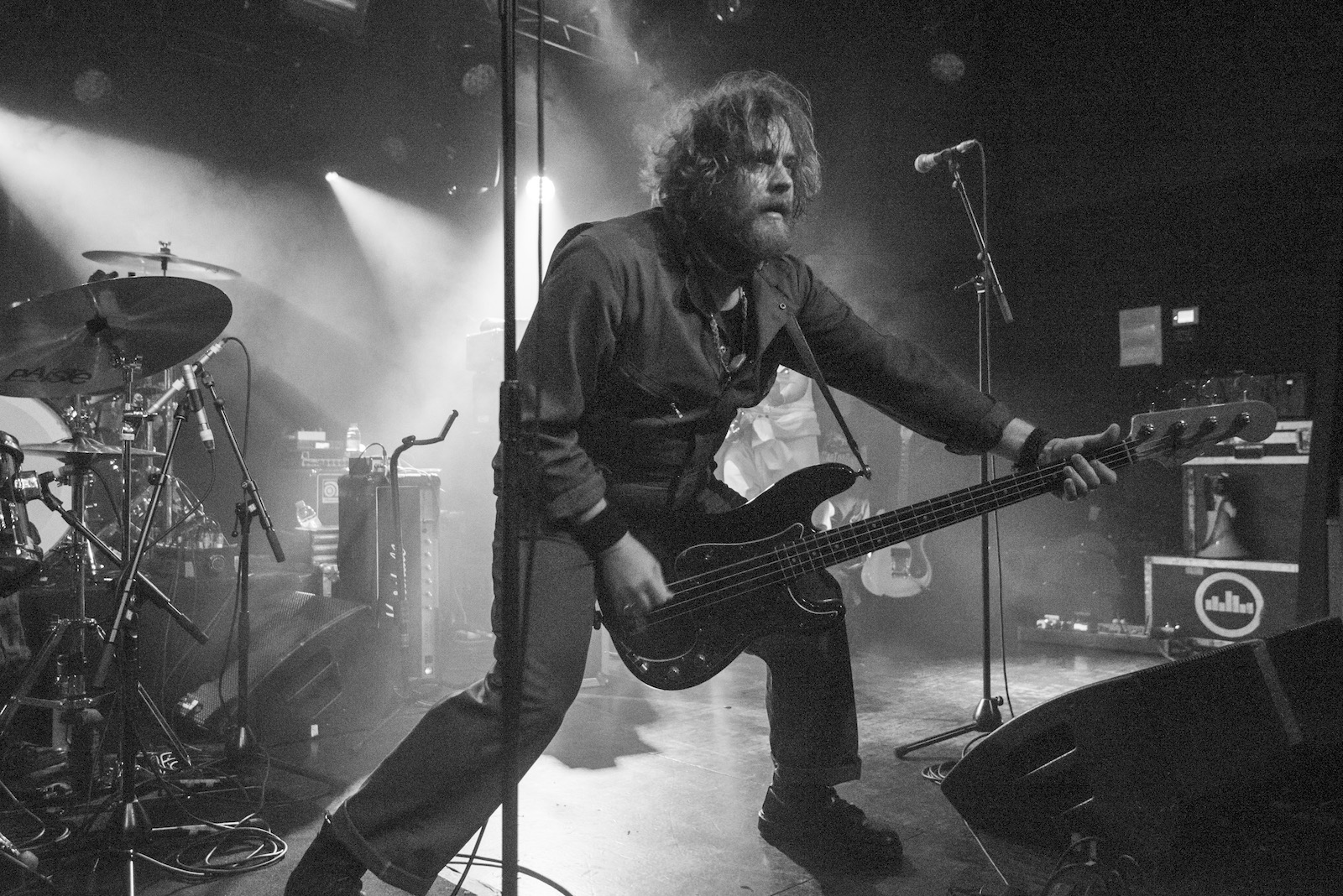 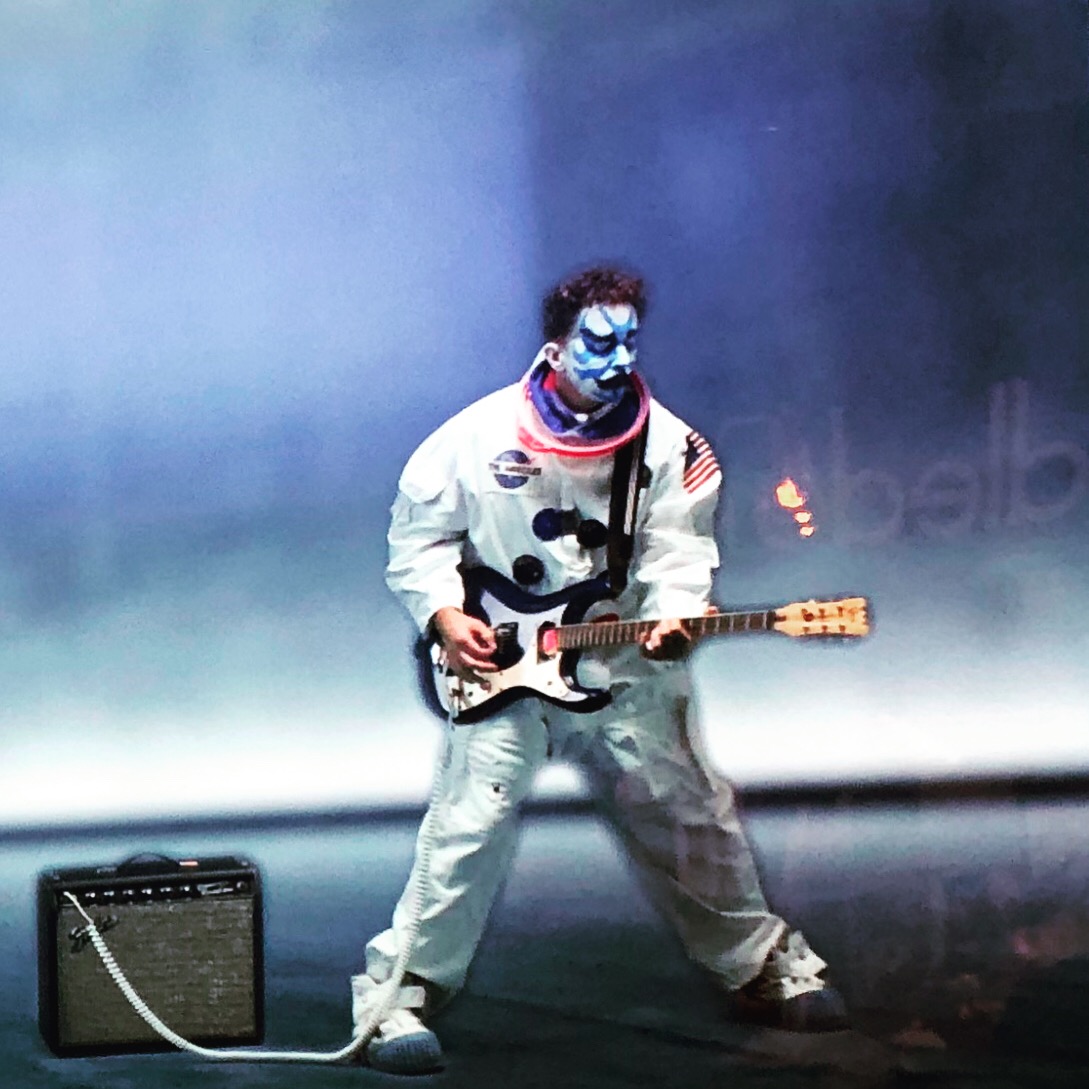